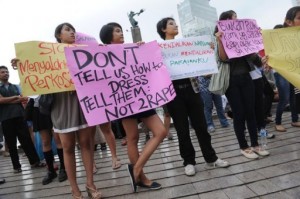 On September 16th, fifty women wearing mini skirts and tank tops stood in the middle of a major roundabout in Jakarta, the capital city of the world’s most populous muslim country. The women were protesting comments by the city’s mayor, who called on women to stop wearing revealing clothing on public transportation after insinuating that a recent gang rape was caused by the victim’s choice in clothing. Police failed to arrest the rapists.

The protest, though small, has an interesting precedent. The AP article
which picked up the story cites the Slutwalks that took place in April in Toronto, as the source of inspiration for the rally in Jakarta.

Utilizing public and private scrutiny of their bodies, female activists in many countries over the course of decades have literally embodied their activism, drawing focus to their physical selves as a site of struggle. This kind of resistance has taken varied forms – compare photos of the recent ‘slutwalks’… 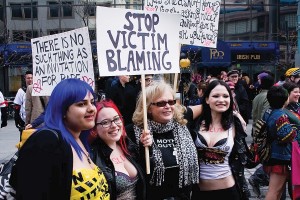 …to photos of the conservatively dressed Madres de Plaza de Mayo (famous for holding vigils for their disappeared relatives during Argentina’s dirty wars)…. 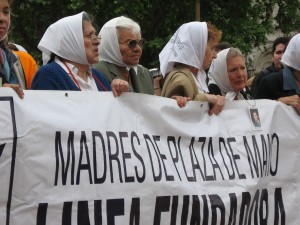 Both functioned, in part, as forms of public dares. In the former, scantily clad women ‘dared’ the public to blame the violence of sexual assault on physical appearance, and the latter ‘dared’ Argentina’s violent elite to deal with elderly mothers wearing headscarves the same way they had murderously dealt with their sons and husbands.

The Madres de Plaza del Mayo are widely credited with their role in drawing attention to Argentina’s disappearances and facilitating an end to the country’s dirty wars. It remains to be seen whether Toronto’s Slutwalks and Jakarta’s mini-skirted protests will successfully realize their stated goals.

As we watch them evolve, it’s important to keep in mind how these bodily tactics situate the women in relation to systems of power and other spheres of activism. Especially in the case of the Indonesian women, donning mini-skirts deeply and visibly marks them as outside hegemonic insitutions of dominance. This can be extremely powerful. Without judging it as right or wrong, it might be fruitful to question, however, how this tactic is received by observant muslim female activists. Is it divisive? How does it impact the work of activists working within institutionalized power? Does it shrink potential ground for collaboration?