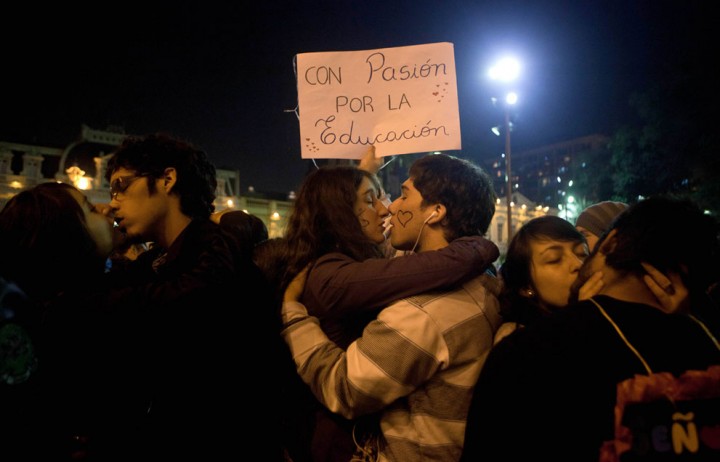 Tens of thousands of Chilean students resumed marches last week in Santiago, demanding a systemic overhaul of the country’s education system. President Sebation Pinera has promised limited reforms and $4 billion in extra funding, but student leaders claim that the offer does not go far enough. The movement returned to the streets after talks broke down earlier this week.

From an organizational perspective, the movement has been an immense success. That leaders are in a position to maintain such widespread demands, four months after protests began, is a testament to the enthusiasm of activists and the movement’s broad public support.

I read an interesting article comparing Chile’s current protests to those waged in 2010 by students in the UK. The differences are stark: while the former seems to continue gaining strength, the latter quickly fizzled into resignation at the largely unmet demands. The article does an excellent job highlighting the historical and cultural particularities that have contributed to differences between activist communities in both countries. After months of watching footage of the Chilean protests, though, there’s another aspect of the movement that deserves attention.

I can’t help but marvel at the fact that these rallies are still going on. Students, along with teachers, parents and otherwise-affiliated Chileans, have continued to show up for four months. It’s clear that the movement is propelled by passionate beliefs about the value of education and the state’s role in providing it. In addition to this passion, though, it’s apparent that the majority of those involved are having a really, really good time.

In addition to sit-ins, marches and hunger strikes, protesters have staged pillow fights, kiss-ins, parades, and a giant ‘Thriller’ dance-off. There have been a lot of costumes, plenty of paint, and fair amount of nudity.

As they hold the interest of hundreds of thousands of young people, the events simultaneously compel ongoing, colorful media coverage. They have served as a nice complement to the articulate, political demands expressed by communist student leader Camila Vallejo.

I was watching a video of some
student protests that took place in June. I was struck by how familiar parade-like atmosphere looked when I realized that it reminded me of Carnival-events held throughout Latin America every February. Kiss-ins, pillow-fights and Michael Jackson have no direct relation to education reform – and yet the Carnival-esque feel of the movement is fitting for broad-based support for the students’ demands. In much of Latin America, Carnival is the largest celebration of the year and diverse swaths of the population celebrate it together, in the street.

The sheer size of the movement, which has been maintained through a creative use of ideological confidence and fun, has forced the state to engage with the students’ populist demands.