New York City Mayor Michael Bloomberg raised the specter of shutting down a two-week long demonstration on Wall Street, telling protesters who are speaking out against greed and corruption that the banks deserve support.

Asked directly on his weekly radio show Friday whether he will allow the protesters to stay indefinitely, Bloomberg replied, “We’ll see.”

“People have the right to protest, but we also have to make sure that people who don’t want to protest can go down the streets unmolested,” said Bloomberg, a 69-year-old billionaire who earned his personal fortune selling financial information to the business community. 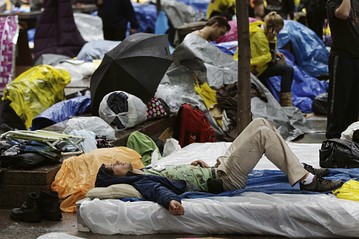 In his remarks Friday, Bloomberg suggested that the protesters are terribly misguided in terms of their policy perspective.

“The protesters are protesting against people who make $40 or $50,000 a year and are struggling to make ends meet,” he said. “That’s the bottom line. Those are the people that work on Wall Street and in the finance sector.”

According to the protesters’ website, Occupy Wall Street is a leaderless movement of people from many different backgrounds. “The one thing we all have in common is that we are the 99% that will no longer tolerate the greed and corruption of the 1%,” the website says.

Defending the banks that appear to be the target of some of the protesters’ ire, the mayor said, “We need the banks. If the banks don’t go out and make loans, we will not come out of our economic problems. We will not have jobs.”

The mayor acknowledged that the banks played a role in the economic downturn, but he insisted, “We always tend to blame the wrong people.”