Syrian artist Tammam Azzam took the twittersphere by storm last week when he posted an image of Gustav Klimt’s “The Kiss” superimposed on the facade of a bullet-ridden building in Damascus. The photoshopped image — which some mistook for an actual street-side mural — brought the eye of the art world to the artist’s war-torn home country. 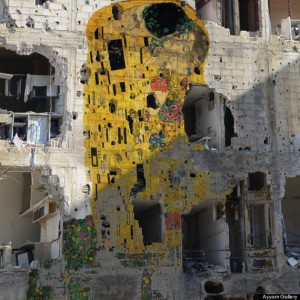 Describing the motivations behind his digital artwork, Azzam said in a statement:

“I want to discuss how the whole world could be interested in art and on the other hand two hundred people are killed every day in Syria. Goya created a work to immortalize killing of hundreds of innocent Spanish citizens on May 3, 1808. How many May 3rds do we have in Syria today?”