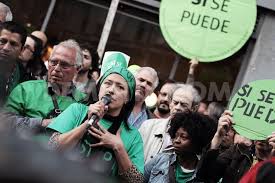 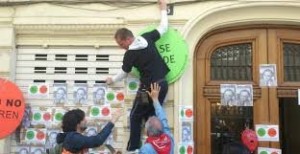 The term “escrache” comes from Argentina, where it was coined in in 1995 by the human rights activist group H.I.J.O.S, to condemn the genocides committed by members of the military dictatorship that had been pardoned by Carlos Menem, who was prime minister at the time. When justice fails to signal a violation of human rights, the people signaled where criminals live. This tactic has been used in various countries, from South America to Northern Europe.

In Spain, the local version of the global crisis is intimately linked with real-state speculation. Companies built buildings, and banks gave loans so people could buy them. Many people from the middle and lower classes got into mortgages that were to be payed in thirty or forty years. Now, that the unemployment rates are over 20%, many people can´t continue with them. But according to current laws, even if you had already paid the original prize of the household, you get evicted from your home. And even after you have been evicted, you still have to continue paying for a house you will never live in.

The Plataforma de Afectados por la Hipoteca (Platform for those Affected by Mortgates) or PAH, was founded in 2008 to face these problems collectivelly. Understanding housing as a human right, they fight against evictions and have launched a People´s Legislative Initiative: this text has been submitted to the Congress with the support of one million and a half signatures people. The Legislative Initiative asks for  the cancellation of debt after the house has been returned (payment in kind), for social-rent prices for the empty homes owned by banks, and for the halting of evictions. These demands have recently been legitimized by a ruling in the European court that says the Spanish eviction law is illegal.

However, Partido Popular (PP), Spain´s ruling party, holds majority in the Congress, and does not want to vote in favor of the People´s Legislative Initiative. According to the PAH, the various amendments introduced drastically change its meaning. Reacting to this, in March, the PAH started their own “escrache” campaign.

Standing in front of politicians´ homes, people affected by mortgages conduct demonstrations and tell their experience with megaphones. The graphic-kit, a usable piece of agitprop, has been designed by Enmedio artivist collective. It depicts the two buttons for voting in the Congress, the red one for “no” and the green one for “yes”. The motto is “sí se puede, pero no quieren” (“It is possible, but they don´t want to”).

“Escraches” have been responded with the outrage of politicians and with polemics in the media. Members of the affected PP party have strongly denounced a practice that they say is anti-democratic and violent, and the government is trying to harden the law. Some annalists say the attention that is being given to “escrache” is covering up the real debate that is needed to solve the mortgage crisis.