First, if you’ve never seen Everything is a Remix, go watch it now. It’s a great primer on creativity, originality, and copyright.

Towards the end he makes a point about a sweet spot existing between the familiar and the novel. He’s talking about movies with box office hits on one side and critical hits on the other. 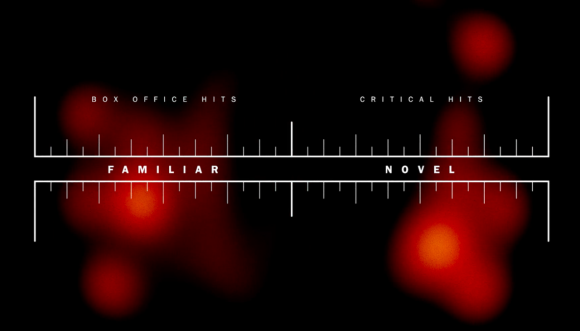 This is very close to something we at the Center for Artistic Activism have talked about with popular culture and radical ideas. Popular culture(s) are familiar and comforting, and radical and visionary ideas may be a hit with academics, researchers, and your activist friends, but are fairly new and unfamiliar to the bulk of the population.

As artistic activists, when we can combine the two: we can put something new into an familiar container.

I remember talking to Jon Rubin about this when he was giving me a tour of the Waffle Shop (Talk Show). The Waffle Shop was just that – a restaurant that sold waffles to customers who sat at tables. It was also a talk show. The customers were welcome to play both host and guest on the talk show and a video camera streamed the show to audiences online. The waffle restaurant is familiar, the talk show is familiar, but going to a restaurant and becoming the host of an internet tv show? Well, that is a little unusual.

Jon explained that people walk into the Waffle Shop and they might not understand what’s happening over at that side of the building, but they do understand how a Waffle Shop works. They understand tables, chairs, menus, and waiters. They can sit there and be comfortable. Then, after some time, they start to try to figure out the talk show. And after that, they have a chance to put it all together and figure out what it means.

A community driven talk show wouldn’t work alone. Families don’t just up and decide to go to the cable access studios and make a show some Saturday morning. And a Waffleshop alone has no meaning. But the two together hit that sweet spot between familiarity and novelty where something new and exciting happened. The Waffle Shop was a huge hit.

The Waffle Shop (Talk Show) is just an example, but the core idea is: if you want your radical ideas to resonate with large audiences, it needs to be rooted in the familiar. We need to speak in a language people understand, and use that language to tell them something new.