Donald Trump Will be President: This is What we do Next

“…let’s exhale and let go of our fear, so we can think as clearly as we can about who we are and what we’re trying to accomplish. We can start by sharing whatever educated guesses we have about what we should do for the next few decades. Here are mine.”

Trump and Brexit are retaliation for neoliberalism and corruption

“Glenn Greenwald frames what I’ve been trying to articulate: as neoliberalism and its handmaiden, corruption, have swept the globe, making the rich richer, the poor poorer, and everyone in the middle more precarious; as elites demonized and dismissed the left-behinds who said something was wrong; as the social instability of inequality has been countered with increasingly invasive domestic “war on terror” policing, millions of people are ready to revolt, and will support anyone who promises no more business as usual. ”

“…left/right divisions in the US are no longer as relevant as the tension between institutionalists and insurrectionists. Institutionalists believe the institutions of our society – government, media, education, healthcare, business – are fundamentally sound, but need the ongoing engagement of good, energized people to keep them healthy and functional. Insurrectionists believe that these same institutions have failed us and need to be torn down and replaced.”

Bernie Sanders: Where The Democrats Go From Here

“Rest assured, there is no compromise on racism, bigotry, xenophobia and sexism. We will fight it in all its forms, whenever and wherever it re-emerges. I will keep an open mind to see what ideas Mr. Trump offers and when and how we can work together. Having lost the nationwide popular vote, however, he would do well to heed the views of progressives. If the president-elect is serious about pursuing policies that improve the lives of working families, I’m going to present some very real opportunities for him to earn my support.”

“Rule #1: Believe the autocrat. He means what he says. Whenever you find yourself thinking, or hear others claiming, that he is exaggerating, that is our innate tendency to reach for a rationalization. This will happen often: humans seem to have evolved to practice denial when confronted publicly with the unacceptable.”

“Evil settles into everyday life when people are unable or unwilling to recognize it. It makes its home among us when we are keen to minimize it or describe it as something else. This is not a process that began a week or month or year ago. It did not begin with drone assassinations, or with the war on Iraq. Evil has always been here. But now it has taken on a totalitarian tone.”

The ACLU’s Full Page Ad in the New York Times 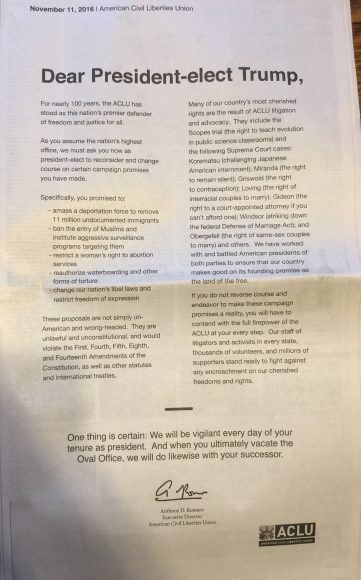 Practicing the Dharma in Uncertain Times

“Remember the Noble truths, no matter the politics or the season: Greed, hatred and ignorance cause suffering. Let them go. Love, generosity and wisdom bring the end of suffering. Foster them. Remember the Buddha’s counsel, “Hatred never ends by hatred but by love alone is healed. This is the ancient and eternal law.”

After Brexit, tolerant Britons adopted a simple symbol of solidarity. We should, too.

“…people of goodwill began wearing safety pins as a symbol of solidarity with immigrants. It was a quick, easy way to show immigrants that you weren’t one of those who despise them and to show everyone else that you wouldn’t tolerate xenophobic abuse. We need a symbol like that in the United States now. ”

“But to avoid the chance that some insane passion would sweep the nation, and drive it to elect a nut, or a demagogue, they embedded an electoral college as a kind of circuit breaker. If the people go crazy, the college would be there to check it.”

Give Them Hope – Harvey Milk