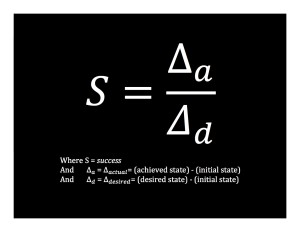 Here’s how it would work in practice: say you want to create a piece that would engage and inform and involve people in the struggle to create community gardens. Only ten people showed up at your first organizing meeting, and you would you’re your piece to double attendance. You make the piece, show it or perform it all around the neighborhood and, lo and behold, twenty people show up at your next meeting. If we plug those values into our formula it looks like this:

And, if we were aiming toward multiple targets, as we might if we were planning a campaign, we might set X different goals/measures and find the average success over them all. That formula would look like this: 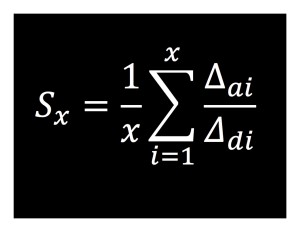 (Plugging in real variables gets so complicated and takes up so much space that you’ll have to trust us that this works. It does.)

There we have it: the formula for successful Artistic Activism!

The math works, but what it can work on is very little. At times, with relative straight-forward objectives that can be easily measured, like increasing the number of people showed up at an organizing meeting, you might be able to use a formula like this. But such easily quantifiable objectives are few and far between. We offer it here as more metaphor than mathematics, a heuristic tool to get us thinking about the aeffect of artistic activism.

Art is marvelously irrepressible. It is forever producing affects and effects that we did not predict or even desire; one could even argue that this is its strength. Art, if it’s any good, always creates a surplus, bubbling up and slopping over the sides of whatever categories we create to contain it, spilling out on the floor, making new forms and patterns that demand new perspectives to understand it and new measures to judge it. Some aeffects of our artistic activism may not be discernible, not in the short run, or even in our lifetimes – mass changes in sense perceptions or bodily patterns, for instance. How do we judge the success of, say, the Re-Distribution of the Sensible which, if we are successful, will have created entirely new criteria of success and failure?

We probably cannot. And that’s OK — we need to make peace with this. Changing the world is a long project and we needn’t get dispirited if it doesn’t happen overnight. Artistic activism, when all is said and done, is an art, not a science. There is no singular way it works, nor formula to determine if it has worked. Acknowledging this, however, does not allow us to retreat back into magical thinking where we create a piece and poof! change happens. We may not have, nor want, the one metric that can be applied mathematically to all artistic activism, but we can, and should, have a methodology. Sometimes the formula above will work; sometimes it won’t. But in all cases it’s imperative that we think seriously about exactly what we want to do and how to know if we’ve done it.

(Thanks to Professor Matt Stanley for the math assist.)