Prince Enoch Kojo Afful participated in the Art Action Academy West Africa 2017 in Conakry, Guinea. Ghanaian born and raised in Nigeria is an art curator, a poet, a spoken word artiste, writer, saxophonist, illustrator, graphic designer and a graduate in physics. Known as POETYK PRYNX, he says he also loves to identify as an activist (with interest in mental health especially,) and a humanitarian.

In his region, it is rare for people to speak up publically about mental health issues, but Prince has organized successful creative gatherings where people have started to get together and make themselves heard.

In organizing these events for mental health awareness , Prince says that he uses the lessons from the Art Action Academy all the time for that work, especially “The Theory of Utopia, the success formula, the creative campaign structure, IPOP, heirarchy of branding”. He also uses these to inform his personal poetry projects and creative hang outs. 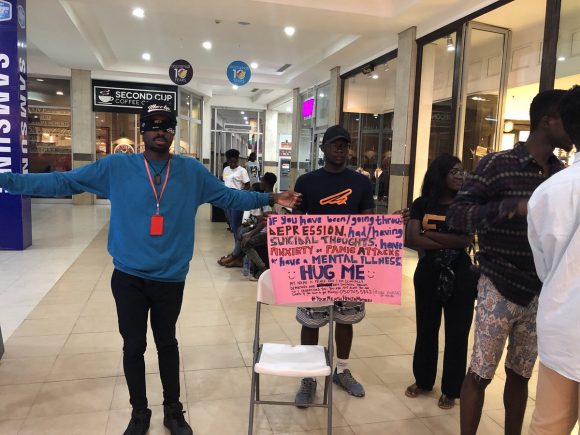 One thing he’s told us is a lesson he’s learned, through organizing vigils (and events like this flash mob with free hugs pictured above) to raise awareness for mental health issues is that there are a lot of initiatives that can give people hope, but they wait for one brave person to start so they can rally behind them. The vigils he organizes bring together many young people by inviting them to share their stories that portray what they’re going through, so they know that they aren’t alone.

Prince is super prolific, and right now, he’s working on a third edition of the candlelight vigil to raise awareness for mental health as well as a show respect to souls lost to mental illness and suicide. He’s also working on two spoken word projects, and an anthology of poems.

Check out Prince’s work at Instagram.com/poetyk_prynx or Soundcloud.com/poetyk_prynxHelp Us Train More ArtistsIf you want to help C4AA train and continue to support more artists like Prince, please donate. Your contributions really help.