The past decade has witnessed a surge in “artistic activism,” both in practice and its study.
Whether it actually works is however still a matter of faith more than fact. What has not been done is an evidence-based, empirical comparative study of the variable impact of creative versus more conventional forms of activism on a public audience in terms of ideas, ideals and actions. Until now.

Over the course of three days in May of 2018 we mounted activist interventions in the popular and well-traveled bridge in the middle of Copenhagen, Denmark. Each day we paired a conventional activist intervention — public speaking, petitioning, flyering — with a creative way of accomplishing the same task, in a classic A/B experimental model. The results were revealing.

May 14th, 2018: We are here in Denmark to launch the “Copenhagen Experiment” with our Danish colleague and friend (and C4AA workshop alumni) Silas Harrebye. This is the first ever public experiment on the comparative efficacy and afficacy of artistic activism vs more traditional forms of activist intervention. Every day for the next three days we will be pairing a traditional activist intervention — speachifying, petitioning, pamphleting –with a creative way of accomplishing the same task. Observers and interviewers will be recording the responses, and we are filming the whole experience.  Our partners on this experiment are ActionAid, RAPolitics and Roskilde University in Denmark and New York University in the USA, and it is being generously funded by the Fritt Ord Foundation in Norway. Today, we met with volunteers at ActionAid Denmark. Why the cow masks and bluetooth speakers? For farting cows of course! 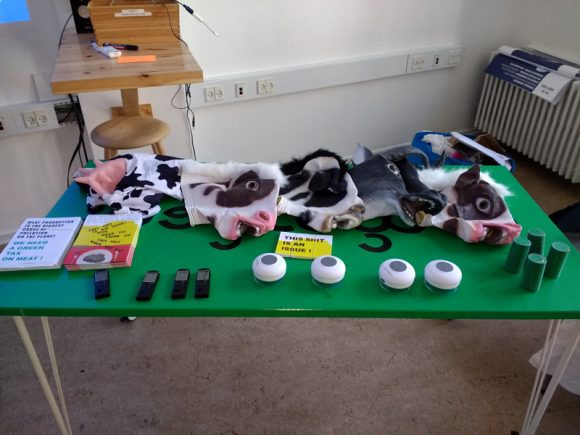 May 15, 2018: First day of the experiment: compare traditional activist speech on a soap box with a creative alternative. Our issue: a Meat Tax being proposed in Denmark as a way to curb climate damaging methane emissions (in the form of Cow Farts –seriously!) Pelle, a freestyle rapper from the Danish group RAPolitics, helped us out by writing up a standard political speech and delivering it in a manner someplace between a tired politician and activist. He then took the same information and composed a rap, and rapped it out on the street to passersby. Pelle performed each version 5 times on a popular bridge in Copenhagen, with volunteer observers observing the interactions and interviewers catching people who seemed interested and asking them about what they thought, felt, and planned to do. 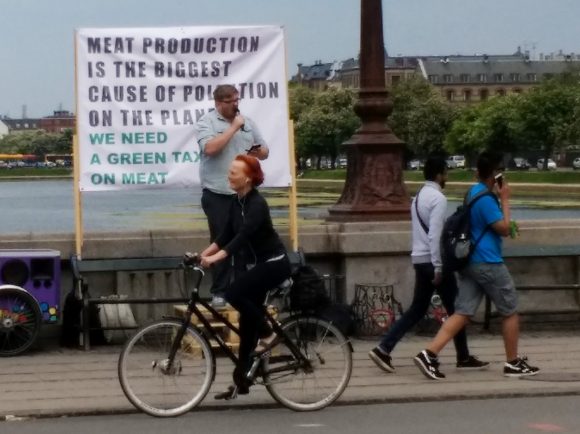 Giving a speech (above) vs. rapping with the Cow Posse (below). 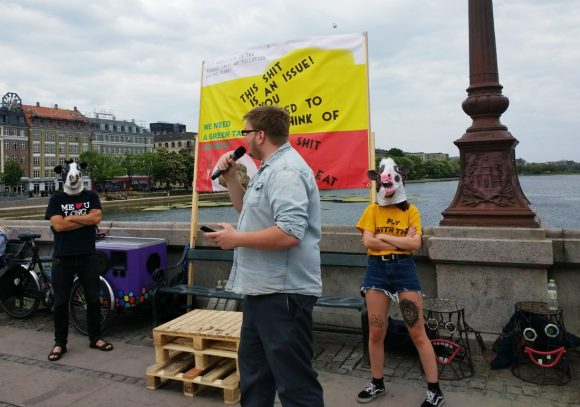 May 16th, 2018: Day 2 of the experiment: taking on the much loathed, and sometimes very necessary activist practice of petitioning. Our issue remains the same, a Meat Tax on Meat Production because it is destroying the ozone, and we create a petition asking for the meat tax that is to be sent to the relevant ministry in Denmark. It’s a sunny day and many people are on the Dronning Louises Bro (aka “Hipster Bridge”) We divide into teams: Petitioners, Interviewers and observers. Petitioners ask strangers for their signature, marking those who refuse as well as accept. Interviewers follow up with those who agree to sign, and ask them why they did. And observers — in white lab coats –watch the whole process, especially those who refuse to stop and sign. First up: our “creative version”: Petitioners dressed as cows, with personal bluetooth speakers and backed up by massive sound system on a bike emanating LOUD fart noises (Cow farts are the leading cause of the release of methane) as the petitioners approach passersby and ask for signatures. We do this for a while and then switch. Sound system goes silent and petitioners strip off their cow outfits and do the same. Then we all go out for a beer! 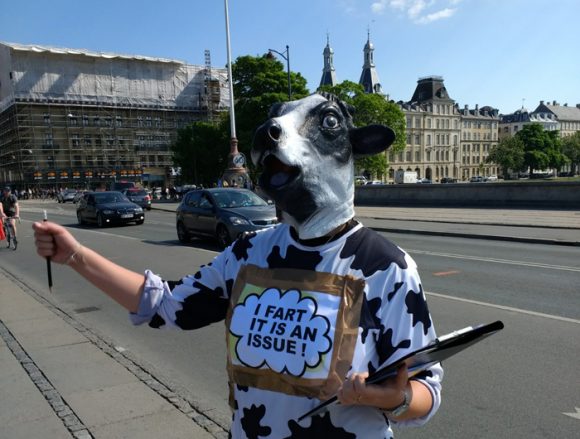 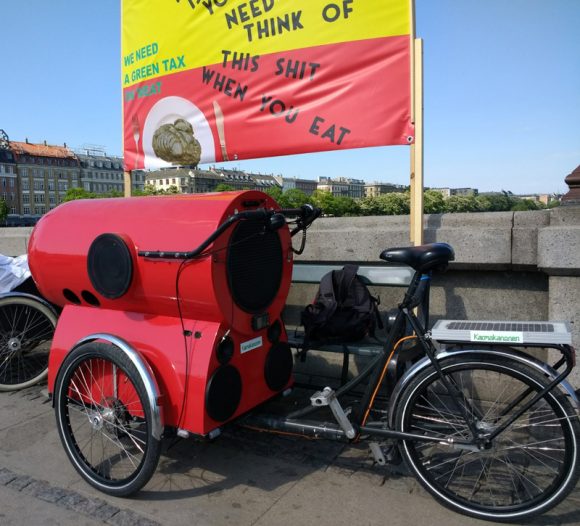 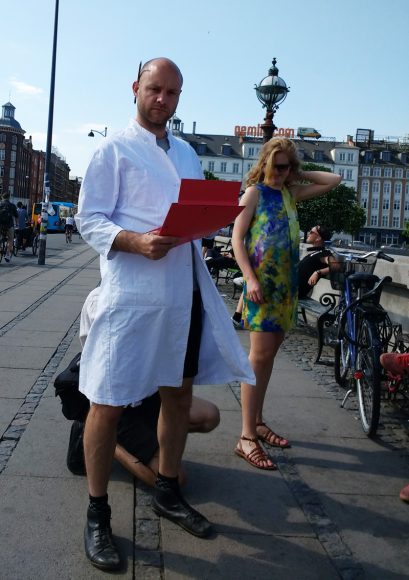 May 17th, 2018: The grand finale of our Nordic Experiment. This day we test out differing tactics of handing out pamphlets. We have two copies of a pamphlet giving information about the environmental impact of meat production, same facts different design. One nice and boring. The other leading with a big ole pile of shit. (If you haven’t guessed already, the Danes are seriously scatological — just goes to prove what we always say at the C4AA: All Culture is Local!) We divide up the flyers into pre-counted packs and have volunteers them out to passersby on the bridge, timing how long it take to get rid of the flyers. Other volunteers observe the process and catch and interview people who have taken a flyer.

First up are volunteers with the “conventional” pamphlet wearing civilian clothes. It goes much as expected, and we hand out all our flyers. We then take a 15 minute break to don the cow costumes, roll out the mega-fart sound machine, and in the pièce de résistance: assembling mounds of real (and smelly) cowshit, each with its own little sign, in a minefield across the walkway of the bridge. The same volunteers hand out pre-counted packets of flyers again. As one might guess, the response was quite different: big smiles and wrinkled noses. And, in the middle of it all: a police van with flashing lights pulls up and we have to explain the whole experiment to a burly Danish cop, all of us trying to keep straight faces as our explanation is punctuated periodically by super-loud farts. (Early research finding: police presence increases flyer consumption). That night we discover that the biggest tabloid in Copenhagen leads with a story of our “demonstration”. 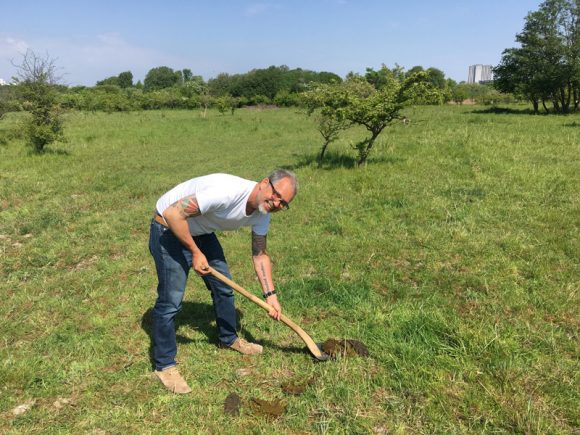 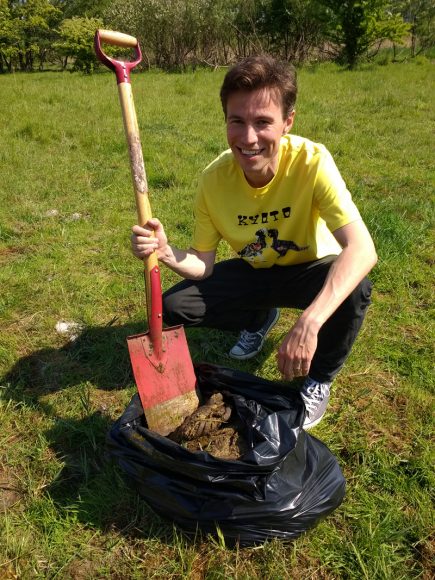 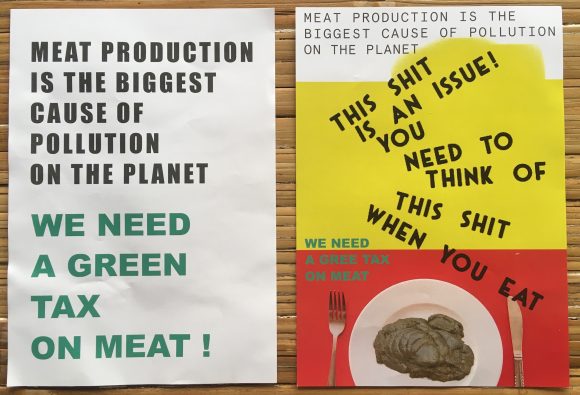 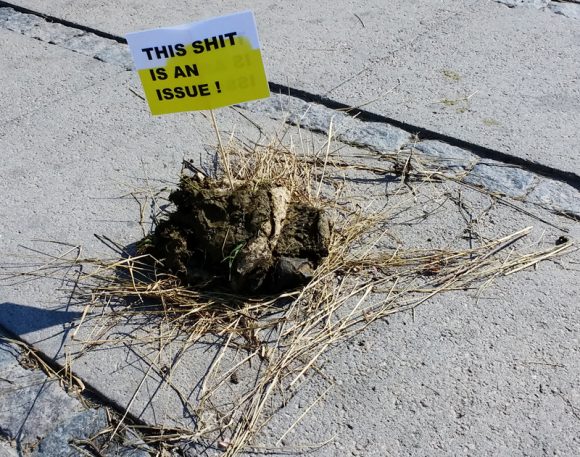 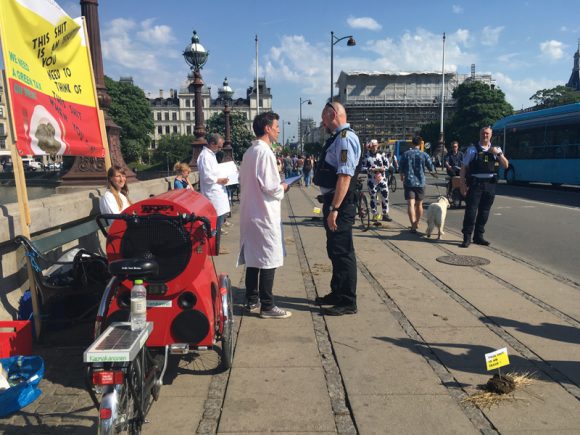 Negotiating with police in front of the Fart Machine 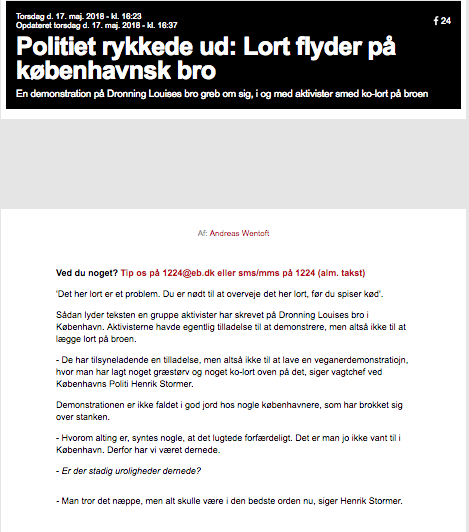 May 21-25th, 2018: Science! Now in Oslo, making sense of all the data we collected over the course of 3 days of experiments: more than 100 interviews, 30 observation sheets, petition and pamphlet tallies, and hours of film footage. (Still to come: follow-up surveys in two weeks time with the folks we interviewed to see what and how they remembered the event and the issue.)

Early findings: on every quantitative measure we employed the creative interventions outperform more conventional ones. More important, however is how people talk about the interventions in our interviews, using words and phrases like “annoying” “irritating” “selling” “tiresome” “I don’t know if I feel anything” as well as “serious” to describe conventional interventions vs. words like: “funny” “inspired” “attention” “capturing” “interesting” “entertaining” “lively” “cool” “not aggressive” “empathy” as well as “disturbing” and “unsettling” to describe the creative actions. 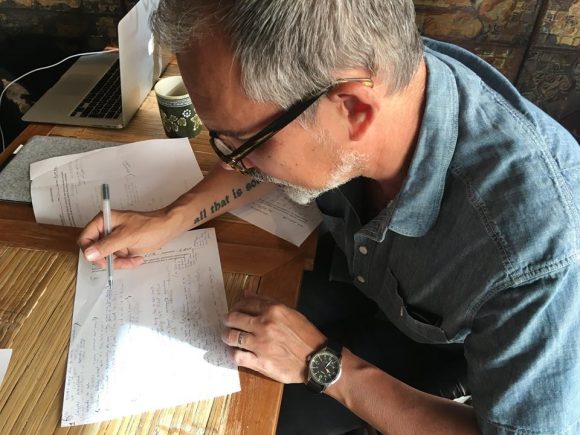 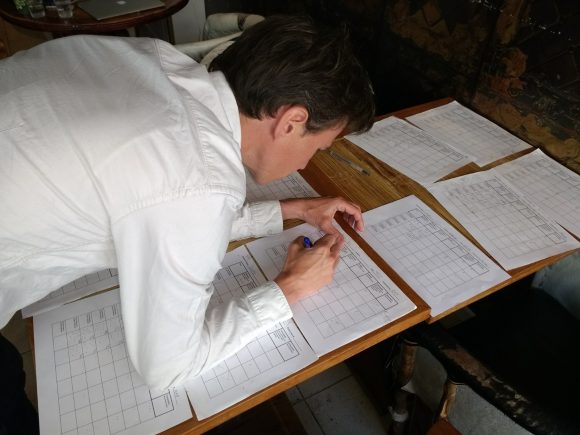 We will be doing further analysis on the data collected during the experiment in the coming months and will be releasing our full report soon. Contact us if you would like to learn more about this experiment or our research on the impact of creative activism in general.